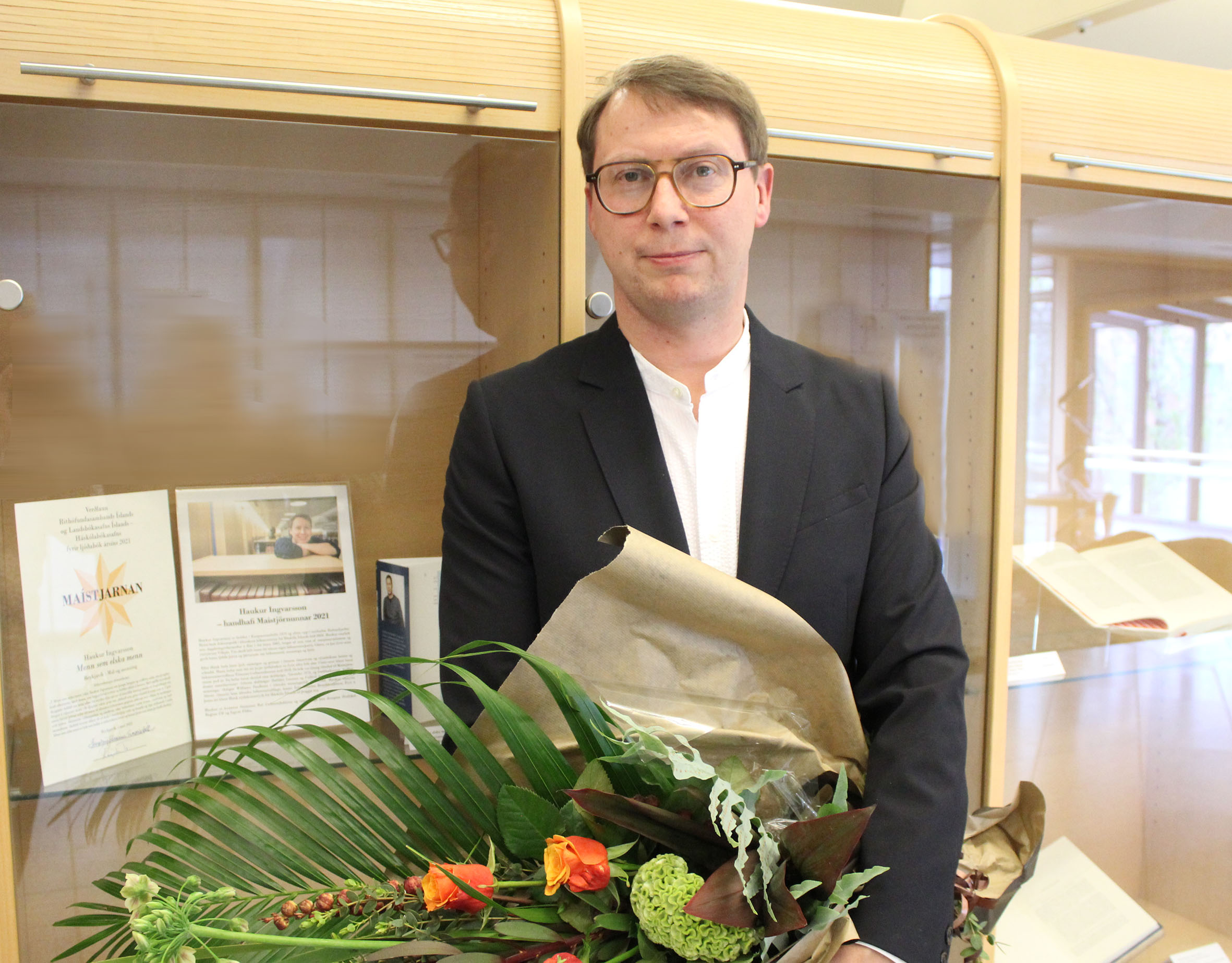 The National and University Library of Iceland in cooperation with The Writers´ Union of Iceland awards a prize for a book of poetry published in the year 2021. The prize, entitled the May Star Poetry Award, was presented for the sixth time at a ceremony at the National Library on 18 May.

The May Star Poetry Award 2021 was awareded to Haukur Ingvarsson for his book Menn sem elska menn (Men Who Love Men).

In Menn sem elska menn, Haukur Ingvarsson writes about a heavy body and a suspended spirit, about the gravity of the universe, love, which binds the materials and keeps the sun on track. With clever imagery, the poet looks around the world from the dark depths of the sea to the vast expanses of space, but reflections on the footprints of a very thin shell over the depths raise suspicions about a surface that can break at any time. The poems contain a dense web of references to Icelandic literature over the centuries, which expands their field of meaning. The book's most pressing subjects and purposeful symbols concern love, friendship, and masculinity. The poet encourages us to dive into the immeasurable depths of words and teach and meet in the spirit. Menn sem elska menn is a book that calls for repeated reading and rewards those who do so. "

Haukur Ingvarsson was born in Copenhagen in 1979 and raised in the northern part of Hafnarfjörður. He graduated with a doctorate in Icelandic literature from the University of Iceland in 2020. Haukur worked as a radio broadcaster at RÚV since 2005, mostly as one of the culture programme´s Víðsjá editors. For a while he held his own literary series Glæta, but in addition he made a number of programmes about literature, culture and the arts.

Haukur has published poems, short stories and articles in various magazines and books at home and abroad. He has published three books of poetry, but for his second book Vistarverur he received the Tómas Guðmundsson Literature Prize in 2018. That book was also nominated for the May Star Prize that year. He has also written one novel, Nóvember 1976, and books  on the literature like the Last Novels by Halldór Laxness and the Williams Faulkner's Reputation in Icelandic Cultural Life 1930-1960. Haukur is at present the editor of Skírnir, the magazine of the Icelandic Literary Society, together with Ásta Kristín Benediktsdóttir. Earlier this year, Haukur received a doctoral grant from the University of Iceland for three years.

Haukur is married to Steinunn Rut Guðmundsdóttir and together they have the boys Hrafnkell, Ragnar Úlfur and Ingvar Flóki.

All published Icelandic poetry books published in 2021 that were submitted to the National and University Library of Iceland were eligible, and the jury received them for discussion. The jury consisted of Soffía Auður Birgisdóttir on behalf of the Writers' Union and Birgir Freyr Lúðvígsson on behalf of the National Library. Maístjarnan is the only prize in Iceland awarded for a book of poetry published. The prize is intended to draw special attention to the flourishing publication of poetry books in Iceland as well as the importance of Legal deposit to the National and University Library of Iceland and thus preserving them as part of the nation's cultural heritage.

An exhibition of the awarded book and earlier works by the prize winner was opened on this occasion.