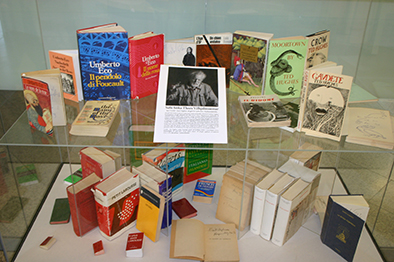 In the autumn of 2016 the brothers Guðmundur Andri and Örnólfur, sons of the writer Thor Vilhjálmsson, presented a collection of foreign books owned by their father to the Vigdís Finnbogadóttir Institute of Foreign Languages. The collection contains many books of renowned world literature, especially contemporary European literature. This is a generous gift of books from the collection of one of the most loved writers in Iceland in recent decades and a great translator of foreign literature in Icelandic, but translations will play a special role in the Institute of Foreign Languages. All his life Thor sought to closely monitor what was significant in the literary world at that specific time. He looked at it as part of his work as a writer and the cultural promotion he always cultivated in his country. He collected books, read them carefully, often with a pen in his hand, so that the books carry his personal mark.
Veröld  (World) – the Vigdís Finnbogadóttir´s house was officially opened at a ceremony on Thursday 20 April 2017. On that occasion we would like to attract attention to this gift, the books will be available in the library. The exhibition will be open until 5 September.