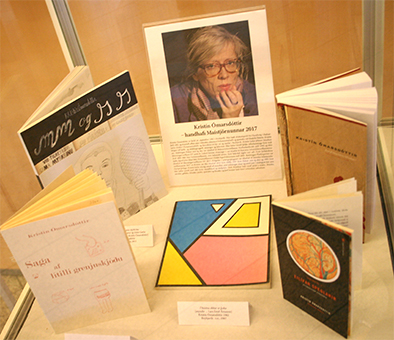 To celebrate that Kristín Ómarsdóttir received the poems award the May Star for the year 2017, a small exhibition of her books has been set up in the Library, together with the award-winning book Kóngulær í sýningargluggum. Kristín was born September 24, 1962 in Reykjavik. She completed a matriculation exam from Flensburg in Hafnarfjörður in 1981, then studied Icelandic, general literature and Spanish at the University of Iceland. Kristín has lived in Copenhagen and Barcelona, but now lives in Reykjavik. Kristín has been equally engaged in poetry and novels, short stories and plays. She has received numerous awards for her work. The novel Elskan mín ég dey was nominated for the Nordic Council Literature Prize in 1999 and received the DV Cultural Prize the same year. Her play, Ástarsaga 3, was nominated for the Nordic playwright prize. In 2005, she received the Gríma Prize, as the playwright of the year, for the play Segðu mér allt. For the poetry book Sjáðu fegurð þína she received the Fjara Award in the Classical Literature series in 2008. The novel Flækingurinn was nominated for the DV Cultural Prize in 2015. Kóngulær í sýningargluggum was nominated for the Icelandic Literature Prize in 2017, but Kristín was also nominated for the novel Milla 1997, for Elskan mín ég dey and 1995 for the Dyrna­­r þröngu. Kristín has also worked on art, shown her drawings and participated in exhibitions where she has worked in different forms: videos and sculptures. The works of Kristín have been translated into English, Danish, Swedish, Galician, French, German, Spanish and Finnish, and her poems have appeared in foreign collections. 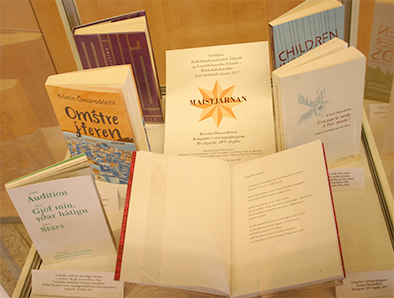