A small exhibition of a few translations of books by Andri Snær Magnason and Yrsa Sigurðardóttir has been set up in the National and University Library. Works by both of them have been translated into many languages during the past few years and the books´ appearances are pleasantly varied.

Andri Snær Magnason was born July 14, 1973. Andri studied Icelandic at the University of Iceland and graduated in 1997. His first published work was the poetry book Ljóðasmygl og skáldarán (Smuggling poetry and stealing poets) 1995 following by the poetry book Bónusljóð (Supermarket Poetry) and the short stories Engar smá sögur (No little stories). Andri´s best known work, however, is most likely his book for children Blái hnötturinn (The story of the blue planet) which has been staged and translated into twelve languages. Andri also published the novel Love Star which was a best-seller in 2002 and won numerous awards. In March 2006 Andri Snær released his book Dreamland – a self-help manual for a frightened nation, which has sold extremely well and received extensive media coverage. The book received the Icelandic Literature Prize in 2006. Moreover, Dreamland was filmed as a documentary which  Andri directed together with Þorfinnur Guðnason in 2009. Last, but not least, Andri published the children's book Tímakistan (The Time casket) in 2013. For the book he received the Icelandic Literature Prize in 2013 and the West Nordic Children's Literature Award. 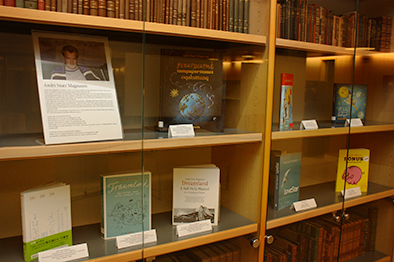 Yrsa Sigurðardóttir was born in Reykjavík August 24, 1963. She graduated as  a civil engineer. In 1998 she published her first book, Þar lágu Danir í því, a children´s book. This book was followed by some books for children and youngsters like Við viljum jól í júlí (We want Christmas in July) (1999), which was awarded by the children's Council of Iceland, Barnapíubófinn, Búkolla og bókarránið (The nanny gangster, the cow and the book robbery) (2000), B 10 (2001) and Bíóbörn (Children of the cinema)(2003), which won the Icelandic Children books Prize that year.
Yrsa´s first book for adults, the thriller Þriðja táknið (Last rituals), came out in 2005. It was very well received and the book has been translated into nearly 30 languages and published in over 100 countries. Thrillers by Yrsa Sigurðardóttir during the recent years include Horfðu á mig (Someone to watch over me) (2009), Ég man þig (I remember you) (2010), Brakið (The silence of the sea) (2011), Kuldi (Cold) (2012), Lygi (Lying) (2013) and DNA (2014). 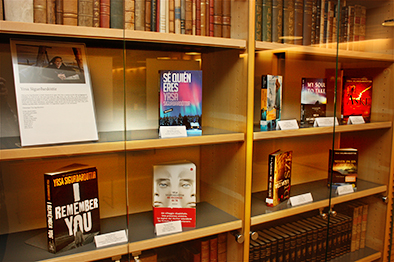