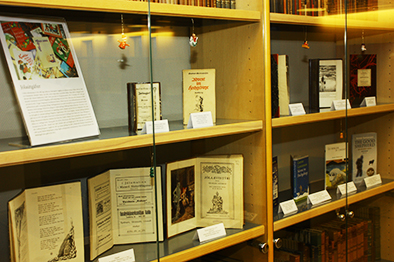 Celebrating the Advent, a small exhibition has been set up in the Library, displaying a few Christmas editions from the past two centuries. These are original Icelandic books, yearbooks and translations related to Christmas. The oldest publication is Jóla­gjøf hand­a Børnum (A Christmas Gift for Children) by Jóhannes Halldórsson (1809-1844), published in Copenhagen 1839. During the years 1917-1923 Steindór Gunnarsson published the annual Jólagjöfin  (A Christmas Present), with diverse material for children. Jólin koma (Christmas is Coming) by Jóhannes úr Kötlum appeared in 1932 with illustrations by Tryggvi Magnússon.The book was published at the time of the struggle for independence when national heritage was revitalized. National legends were brought closer to the people and an Icelandic Christmas culture established. The book was recently published in an English translation by Hallberg Hallmundsson. Aðventa (Advent) by Gunnar Gunnarsson was originally written in Danish and first published in Germany in 1936. It was first published in an Icelandic translation by Magnús Ásgeirsson in 1939. The first edition of an Icelandic version by the author himself was published in 1976. The classic Christmas Adventure by Dickens was published in an Icelandic translation by Karl Ísfeld in 1942. Brian Pilkington is probably the most productive author of Christmas books for children in Iceland in recent years and his version of the Icelandic Christmas lads is becoming very well-known abroad. Here, one can also see Jólasveinarnir (The Christmas Lads) by Iðunn Steinsdóttir, illustrated by Búi Kristjánsson from 1993 and Jólaljóð  (Christmas Poems) chosen by Gylfi Gröndal and published by Forlagið in 1993, Jólasögur úr samtímanum  (Christmas Stories from the Present) by Guðbergur Bergsson published in 1995 and in German as Weihnachtsgeschichten aus der Jetztzet in 2001, Jólaljóð  (Christmas Poems) by Kristín Ómarsdóttir from 2006 and finally Jólabók Blekfjelagsins (The Christmas Book of the Blekfjelagið) (The Ink Society), an annual edition of short stories by MA candidates at the University of Iceland, published by Blekfjelagið from 2012 and onwards. 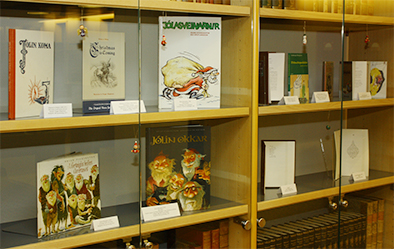 From the Ground (finished)